Today we decided to split the ride up into three legs. The last few days the second Leg riders were getting in so late and the riders and crew were feeling the fatigue. So this format allowed everyone to get some rest.

There were just two of us for this leg and that was Hagop and I. The exact mileage was to be figured out by the rest of the crew while we were riding.  We were told to ride 50 miles so that is what we did.

It was a cold start from Cuba, New Mexico with an elevation of close to 7000′. It was 37 degrees when we started but quickly dropped to 31 as we climbed into a dense fog. I worried a bit about our support vehicle following close behind us in this limited visibility. Luckily this road was not very busy.

My hands and feet were hurting from the cold. About 25 miles into the ride I looked over and noticed Hagop had ski gloves on. Smart guy!

It was a hilly day so the climbs warmed us up but then we would cool off again on the descents. The scenery was really nice and the roads were good with light traffic so it was a nice ride. This would be our shortest ride next to Leg 1.

We climbed to an elevation of almost 8000′ today. I was excited to think that Hagop and I reached the highest point of LA2DC. Later we would find out that Vasken and Sedrak towards the end of the days last Leg would reach almost 9000′! They also decided to add 17 miles to the Leg so we could start right from the Cimarron Inn the next day. It was mostly downhill to Cimarron after all. Starting and finishing at the hotel always saved us the loading and unloading time so it was nice when we could do it this way.

That evening we would go out to the Saint James Hotel Restaurant for dinner. I am pretty sure we set a record for the most Armenians ever to visit this establishment. Though we were surprised to see a small Armenian Flag in the lobby of the Cimarron Inn where we stayed. The manager told us an Armenian Boy Scout Troop had visited from the Bronx a year earlier and left the flag. 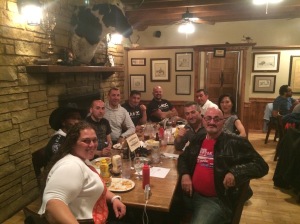