Each year we do our annual Epic Chilao ride and campout. The 2009 Station fire led to us missing a few years after the Angeles Forest was closed to allow the forest time to recover from the fire. Once the trails started to reopen many of the trails were overgrown with Poodle Dog Bush. This plant follows fires and last 7-10 years. It is worse than Poison Oak with similar symptoms.

The last time we did this ride in May 2012 most of us suffered the effects of the Poodle Dog Bush and some are still to scared to return to the forest!

Traditionally this ride had a support vehicle to carry our gear from Millard Campground just above Altadena to Chilao Campground. This year we decided to bikepack it. That means we would carry our own gear and be self supported. Of course most of our buddies aren’t set up for this so the crew was narrowed down to Igor and I.

Having backpacked for years I planned to use the same gear as I do on foot. I packed everything into my backpack for the two nights and three days. My pack weighed in at just under 20 lbs.

Igor invested in lightweight gear and bike mounted bags to carry his gear. He would use a small backpack that he rides with all the time to carry some gear and water.

We met on Thursday afternoon at Millard Campground. There was a light steady rain coming down. This precipitation we knew was due to the dense marine layer known as June gloom! We figured we would ride up for an hour or so and rise above the marine layer but it was much thicker than we realized.

We started riding around 1:00 pm. Of course Igor wanted to ride up Sunset Ridge Trail. The much more challenging option of the two options available. It gave us a chance to test our gear set ups and of course or riding abilities! The trail is a little overgrown and anytime we would brush up agains the wet brush we would get a shower. This gave us a chance to also test the waterproofness of our gear. Mine held up well. Igor’s not so well.

Once we were riding for an hour or so the rain stopped and we began to dry out. It was not until we were almost 10 miles in that the sun would come out. Though it was very brief and we could see the marine layer moving up the mountain as if it was following us!

We dropped down Valley Forge Trail. The trail seemed to be in good shape for the first 500′ or so and then things got bad! The trail was so overgrown you could not see the trail tread. The overgrown brush was mostly Buckthorn with some Poodle Dog and Yucca thrown in here and there! As the name implies Buckthorn is thorny so it was not long until some blood was shed!

We thought about heading back up the trail and taking a different route but then we would see an opening in the brush and it appeared that it would be okay ahead.

These open sections were short though and it would get thick again! We pushed through it and made it down to the Gabrielino Trail after 45 minutes of bushwhacking. By comparison my usual time down this trail is about 15 minutes. We were happy to see the Gabrielino Trail was in pretty good shape even though Igor said the brush was thicker than it had been just a few weeks prior.

We would only see one other trail user today. The wet weather kept the bugs away too! This time of year the gnats can be pretty bothersome in this area so that was a nice thing about the rain. West Fork Campground is a small free campground with about 6 sites and a pit toilet. The West Fork of the San Gabriel River seems to be always flowing so there is water available. We had the place to ourselves until just before da 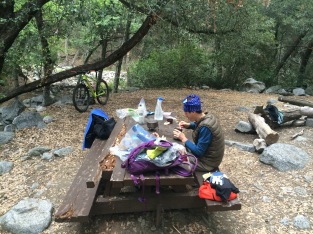 rk when a backpacker came down and made camp.

For dinner we brought some preprepared meals. Hope had made a pasta salad the night before and it really hit the spot! We had a peaceful nights rest. The sound of the river flowing by was soothing.

For breakfast we had oatmeal, dates and trail mix.

Our ride today would take us up the Silver Moccasin Trail to Chilao Campground. Igor had ridden it about a month before so we knew the first 1.5 miles through the Canyon had several fallen trees to climb over. Fallen trees are a common thing these days in the Forest after so many trees were killed in the fire. In the month since Igor had been there last the brush had grown quickly and it was very thick in places. There was a lot of hike a bike sections. Once we left the Canyon floor the trail was in good shape. Though it is a very steep climb up to Shortcut Saddle.

From Shortcut Saddle we could see the marine layer hugging Mount Wilson. We were well above it now enjoying cool temps, a nice breeze and sunshine. I had tried to ride the Silver Moccasin Trail through the Charlton area a few times in the last couple of years but it was to overgrown with Poodle Dog Bush. It was nice to see it has all been cleared and it is in good shape! Thanks to our friends Mike, Robin, Steve and others that have worked on it!

Once we arrived at Chilao we rolled into the Little Pines Campground. It was completely empty. After a few laps around the campground we picked a nice site and set up camp.

I had my tent set up and my sleeping pad, pillow and sleeping bag inside and was getting ready to stake it down. A gust of wind came up suddenly and my tent was airborne! It took off like a kite flying 30-40′ in the air. It came down and then another gust blew it again. Luckily it settled down and landed 120′ away on some brush. My sleeping bag had blown out and landed on some Poodle Dog Bush!

Once we had camp set up we continued riding up the Silver Moccasin to the Santa Clara Divide Road and then looped around Mt Hillyer. The trails in the Chilao area were in great shape and it was a really fun ride!  We did hear some thunder nearby and saw some dark clouds but never got rained on. 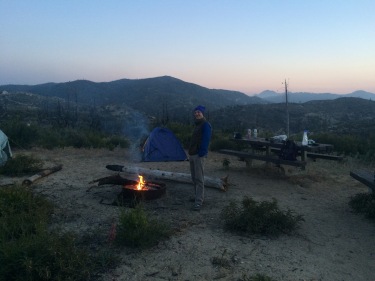 Once back at camp we took baths under the water faucet, got a fire going and had some dinner. The temps were cool so the fire felt great! We sat around and discussed possible routes for our next backpacking trip.

That night the low was 40 degrees so Igor had a chance to test out his new 40 degree rated sleeping bag.

Igor’s new lightweight tent weighs just over 1 pound! The first night was a challenge to set up but the second night he had it up very quickly.

The ride down on Saturday was backtracking the Silver Moccasin to West Fork and then the Gabrielino Trail to Red Box. We then went up the Mt Wilson Road to Eaton Saddle. I was feeling tired so I opted for the Mt Lowe Fire Road while Igor took the singletrack down. 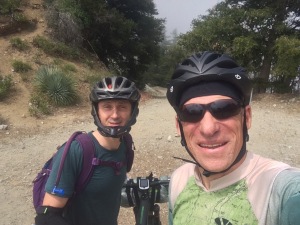 I brought my two man backpacking tent which was my heaviest item. It weighs 4 1/2 pounds. For the next trip I am thinking I will get a Bivy sack to save some weight. I will probably do what Igor did and attach the Bivy and sleeping pad to the handlebar to take some weight off my back. Igor thinks he might need a warmer sleeping bag or to get some fat on him for insulation!