In mid September my friend Shawn invited me to join him and his two Daughters Jessi and Alison on a backpacking trip into the Sespe Wilderness. Shawn’s friend George would also join us.

It had been a while since I had visited this area. I did one hike into the Sespe with Natasha and my Niece Teresa about 20 years ago. Before it had became a Wilderness area I would ride in the area on my motorcycle from Hungry Valley. That was before 1992 the year it became wilderness.

I did not really know what the plan was or much about the route except that Shawn said it was one of the easier routes into the Sespe. He mentioned a 10 mile hike to the campground and I had my concerns about that being a long hike for the girls.

We would start from the Piedra Blanca (White Rocks) Trailhead. It was about a two hour drive from my house.

Shawn picked me up and drove so that was nice! We arrived at the Trailhead at 9:00 am to find George already there and ready to go. We gathered our gear and began hiking at 9:30 am.

The temperature was warm at the start but it was nothing compared to what was going to come later. By noon it was around mid nineties and there is very little shade on this route. Everyone seemed to be handling it okay. We would get a breeze once in a while to cool us off. The beautiful scenery did wonders to keep our minds off the heat.

After 10 miles of hiking we came to an old sign with names of places we did not know. Someone had scratched Willits into the sign and it looked like it said 1.5 miles! We had expected to arrive at Willits after 10 miles but that was not the case. On the map it showed a campground and we figured it was just ahead in some trees. We decided to check it out. We found one small camp site among tall grass and thorny plants. Not very appealing! I walked down to the streambed while the others rested in the shade. I could not find any better camping sites. The stream was dry and there were lots of Bear prints in the dried mud.

After a brief rest in the shade we all decided (some reluctantly) to push on! We would pass along some areas of the trail where there was lots of black rock and it felt like we were in an oven. Alison slowed way down so Shawn stayed with her and gave her some words of encouragement! Jessi, George and I found a small shady spot on the trail so we decided to take a break and let Alison and Shawn catch up. When they did we had a hard time getting up and going again!

After 11 miles of hiking we found a nice campsite under the tree canopy! We set up camp and Shawn and George went looking for water. Luckily they found a spring! Then we waited for the sun to drop a bit before hiking  another 1/2 mile to the Willit hot springs and a much needed soak! Yeah it was green but it felt good!

On the way back to camp we stopped at the creek and filled up on water while Jessi chased frogs around. 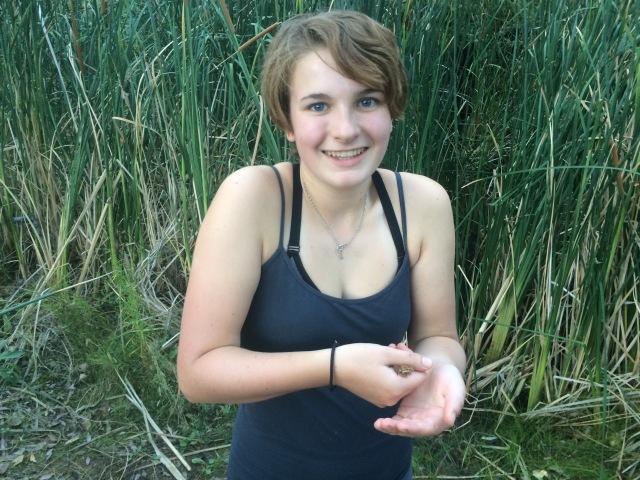 Once back at camp we made some dinner. It turned out I did not need to bring food because Shawn brought enough for three days for everyone!

I suggested we get up early the next day to beat the heat on the hike out. Though it would have been nice to lounge around a bit in the morning everyone knew it was the best idea.

We were hiking out around 7:00 am and it was already feeling warm. Our backs were lighter and we were making good time hiking out. The sun was low enough we still had some shade.

Three hours later and we had 8 miles behind us. It was getting really hot now! In the distance I could see what looked like water. I thought I must be seeing things so I just kept walking and did not say anything to the others. As we got closer I was pretty sure it was water so I pointed it out to the others. The girls asked if we could go swimming. I am sure at this point we were all thinking the same thing. We found the oasis after one wrong turn and could not believe our eyes. The water was deep and crystal clear. Everything seemed so dry out here so finding this seemed like a dream! The water was cool and refreshing! It was a nice break but it sure was hard to leave! 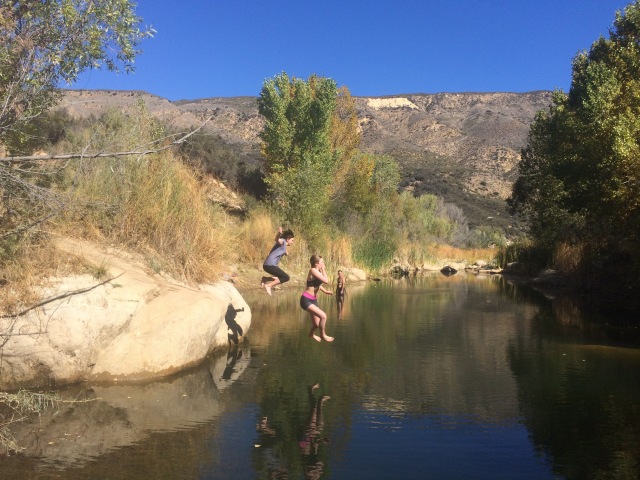 Hike Stats: 23 Miles out and back Piedra Blanca to Willits Hot Spring