Way back in 2004 we decided to ride from San Francisco to Los Angeles. We would do it in five days with no support vehicle. This time we figured we would have support and camp along the way. It’s a good thing we had the support vehicle because we had more then our share of mechanical’s on this trip! On the trip in 2004 we only had one mechanical when Andres broke his rack. Luckily it broke right  by a bike shop.

The plan: to drive to SF and then ride back to LA camping along the way. We rented a van to use for a support vehicle. Natasha drove the first half of the week and Hope for the second half.

8/9/14 Being that it is high tourist season motels and campgrounds were booked up in and near San Francisco so we decided to camp at a private campground in Half Moon Bay. We crammed in between an RV’s and other tent campers for the night.  We were very lucky we managed to get a spot here. 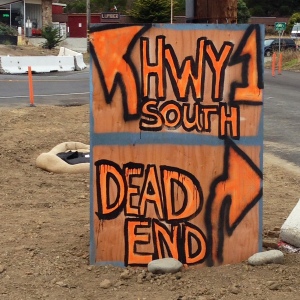 8/10 Day 1 of riding:  The plan was to ride from the Golden Gate Bridge to Manressa State Beach.

With the first peddle stroke things went wrong. Julio broke his derailleur hanger. Since pretty much every bike has a different hanger this was bad news. He loaded his bike back in the van, so glad we had the support vehicle this time around! Julio and Natasha drove around to three bike shops before finding the needed part. He would then bump ahead to Pescadera to meet up with us and start his ride.

Andres, Roobik, Shawn, Mitch and I were around 20 miles into the ride when I slowed down and looked back for Mitch who had fallen slightly behind. When I looked ahead again I did not see the guys who had just been a few hundred feet ahead. Apparently they missed a sign for the bike route and a few other signs about the freeway entrance and they rode right onto the freeway. Since we were not sure where they went and we did not want to ride on the freeway we stayed on the bike route. We must have missed a Coast Bike Route sign sometime after that because we started heading inland.

One thing we realized is the route was much easier to follow 10 years ago. It seems many bike route signs were missing along the way. Believe me after this wrong turn I was looking really hard for them.

Once I realized we were off the coastal route we started to ask other cyclist for directions. We were told o 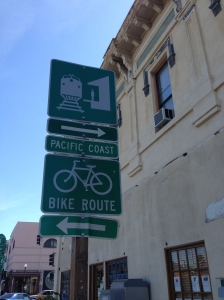 f a better route then the coast bike route. So we decided to check it out. First we rode along a scenic Lake on a backcountry road that was closed to cars for the day, then onto a twisting mountain road through a redwood forest. We found narrow roads and long climbs along this route. It certainly added some distance. Mitch was not liking it because of the climbs but later when we regrouped with the rest of the guys and compared routes we were surprised that they had slightly more elevation gain along the coast. We had long climbs but they had many short ups and downs.

Mitch had three flats today! That is three more than we had on our entire 520 mile ride ten years ago.

The campsite at Manressa SB was nice. The only bummer was we had to hike in a few hundred feet with our gear.

Shorter and flatter day. This was a very scenic ride. We left early to try to beat some of the tourist traffic through the Monterey and Pebble Beach areas. It worked and we had the road to ourselves for a while.

Mitch and Natasha went ahead in the support vehicle to secure two camp sites at Molera. We would regroup at a lunch stop at a deli near Pebble Beach. Molera is a first come first served camp ground and everything else was booked up for miles around so we wanted to be sure to get a couple of sites. There is a limit of four people per site so we needed two sites.

It all worked out and they were there in plenty of time to get a couple of sites.

We thought we had a long walk in to our campsite at Manressa but it was a short walk compared to this one. It was about 1/3 mile in to the site here. Once we humped all our gear down we quickly realized the hike in was worth it. It was a beautiful spot. The campsites were very spacious with lots of room between sites. Natasha and I took a hike to the beach and then looped around on another trail back to the campsite.

We broke camp and packed it out. Lucky for us Julio had noticed the dirt service road cut up to the highway in about half the distance as the trail and it was a lot smoother too. We brought our gear up to the road while Mitch went to the parking to get the van and meet us at the top of the service road. This saved us some time and energy.

This will be our biggest climbing day. We will camp at Morro Bay SP. We have camp ground reservations so one less thing to worry about. Andres and Shawn have a motel room reservation.

Mitch decided to bump ahead in the Van with Natasha. She drove him for 20 miles then he started to his ride. Shawn, Andres, Roobik, Julio and I took off together. The pace was starting off a little fast for me. I need to ease into these things. I told the guys to go ahead. I knew they were going  to stop for coffee and to check email and that would give me a chance to catch up. 20 miles later I would see Natasha and she said the guys were still behind. I must have passed them somewhere. She said that her and Mitch had seen some Whales so I was keeping an eye out for them. It was still early so the road was not very busy. A few miles later I would see a group of Whales so I stopped to watch them. That is when Natasha and Shawn caught up to me in the van. Apparently Shawn did not see Andres, Roobik and Julio either. Should we worry? No, we just kept on riding.

A few miles later I heard a piece of metal hit the highway and my foot slid off of my pedal. My cleat on my right shoe had broke off. There are not any bike shops in this area so all I could do was keep riding and try to keep my foot on the pedal. I had to compensate for this with my left leg. I could not stand up and peddle because my foot might slip off.

After another hour we spotted the van ahead. We stopped for a quick peanut butter and jelly sandwich and some fruit. As I was getting ready to take off again. Andres, Roobik and Julio rolled in. They decided to go in the restaurant and eat. Shawn went with them.

I kept riding and figured they would catch up. Once they ate and got ready to roll Andres realized his tire had a bubble on it and there was no way it was going to make it. He had a spare in the van but could not get it to seat. It was a tubeless tire and I am not sure why he just didn’t put a tube in it? Shawn was quick to let him use his wheel off his bike. I guess the multi day riding was wearing him down.

They never caught up to me and I would finish the ride solo to Morro Bay. About 20 miles from Morro Bay I would get a flat tire and I thought for sure they would catch up. Mitch also had a flat or two this day and did most of the ride solo. Riding solo is certainly much more effort then riding in the group but sometimes it’s nice not having to concentrate on the pace line.

Hope had driven up to Morro Bay and we would say goodbye to Natasha. She needed to start work the next day.

Highway 1 through Big Sur is one of the most scenic rides and I think it is best seen by bicycle. The catch is you have to do it early in the morning before all the vehicle traffic.

In 2004 we did this trip in five days, we planned to do it this time in six so it would be a little easier on us. Well, shortly after we left Morro Bay the conversation turned to our planned stay in Lompoc and the fact that there really wasn’t much there and how it would be nicer to make it back to the coast and stay at Refugio State Beach. Then the next day we could ride from Refugio to Santa Monica and get home a day early. The thing was that Refugio was 115 mile ride! About 15 miles from Refugio you have to ride on Highway 101 and we decided Hope would meet us just before Highway 101 and we could get in the van and avoid riding on the Highway. This would give us 100 miles for the day.

When we made it to Highway 101 Andres said lets just finish it! I had enough and opted to stick to the plan and get in the van while the rest of the group rode the rest of the way. Hope and I found the bike in sites which are some of the best sites in the campground. They are right across from the beach. We were able to pull the van up and unload and then drive the van up to the overflow lot. This would be our easiest camp site of the trip.

We weren’t at Refugio long before the guys rolled in. I was surprised they made it so quickly. They said it was mostly flat with some downhill.

Approximately 10 miles into the ride the cleat on my left shoe broke! Now both cleats are broken and peddling is very difficult. We were close to Santa Barbara and many bike shops so at our planned stop at Starbucks we would meet up with Hope. I jumped in the van and my quest began for replacement cleats. After a few phone calls and stops at three bike shops I found the right cleats.

We caught up with the rest of the crew at Faria Beach between Santa Barbara and Ventura. Otto had taken the train up to Santa Barbara and was now in the Peloton along with a few bike tourist they had met along the way.

Otto rode with us to just south of Ventura then peeled off to head home to Simi. Shawn and I bailed early and jumped in the van. Julio, Andres and Roobik kept on riding determined to finish it!

The only ones to complete the entire route were Andres and Roobik. These are their stats: 500 miles and 26786′ elevation gain.

More photos of the trip can be seen here: Photos