Back in 2004 I took a road bike ride with some of my buddies from the Over the Bars Mountain Bike Club. We rode down the coast from San Francisco to L.A. That trip would become the first annual OTB 500 road bike tour.

This year we took a trip to Oregon. We rode 455 miles in 6 days. We climbed 26,875 feet in that 455 miles. Natasha was our support driver. The best part about the trip was being able to spend time with her.

The following report was written by Julio on our drive home.

We met at Hans’ house @ 6:45am, loaded and departed by 7:20 am.  Surprisingly, Julio packed lighter than Hans.  Our first stop was for lunch at Carl’s Jr, chicken salads and chicken sandwiches.  We arrived in Redding at about 4pm to a warm welcome from Hans’ sister Mina and her husband Pat.  Mina made an amazing dinner for us, homemade enchiladas and brownies with ice cream.  It was a nice Saturday afternoon gathering with Hans’ nephew Sean, wife Tosha, and daughter Marlie joining us for dinner.  We hit the sack early and watched a bit of the Persius meteor shower. 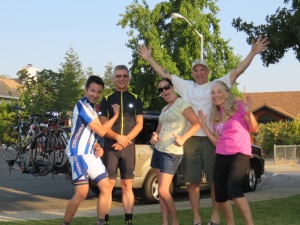 We started the morning with another great meal from Mina, French Toast, then loaded and headed to Medford, Oregon.  We unloaded our bikes and realized that Hans’ pump is older than he is.  Roobik’s state of the art rims would not take air from the pump, so we had to locate a bike shop that was open on Sunday.  Luckily, a shop was open nearby and Roobik was able to purchase a pump that worked.  Hans and Julio had started riding, it was 11am, while Natasha’s MVP performance was already in gear, taking Roobik to the bike shop and dropping him back off with the group 15 miles up the road.  We stopped for lunch at Mac’s Diner, 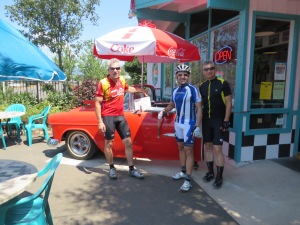 then continued our climb to Crater Lake.  The climb was steady amongst the beautiful Oregon forest, and the weather was perfect, although we just missed a storm the day before as parts of the road had standing water and debris. The final road up to Mazama Campground was a steep 6 mile climb.  Roobik picked up the pace and took the KOM, Julio followed while Hans’ knee began to give him trouble.  We were pleasantly surprised that the campground had showers, and Natasha had picked a perfect campsite.  For dinner we had veggie burgers, salad, and beans, and enjoyed true stories at 7200 feet elevation, our coldest night of the trip. That evening we attended the forest ranger’s amphitheater slide show on the history of Crater Lake, but walked out early to get to bed.

Wake up call was at 6 am, with our standard alarm from Hans, a shaking of your tent followed by “..are we here to ride or sleep?”  We had apple pancakes for breakfast, tore down camp, and we were on the road by 8am.  We started with a 7 mile climb to the Crater Lake Rim road, followed by 25 miles of undulating, scenic road around the crater. 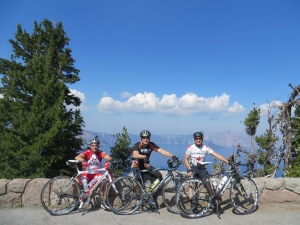 We learned that Crater Lake is the deepest and cleanest lake in the world, and the clear blue water was amazing.  We met many tourists at the rest stops, and most drivers were very bike friendly. After many pictures and amazing vistas we were rewarded with nearly 40 miles of downhill.  Oregon’s beauty surprised 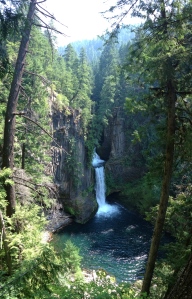 us, as it was one incredible lake and volcano after another.  We rode by Diamond Lake and Mount Thielsen, and stopped for a hike to Tokatee Waterfall with Natasha.  We later camped at Susan Creek State Park and enjoyed chicken, corn and salad for dinner.  The weather was perfect again for what would be our most scenic stage of the trip.

Breakfast was French Toast and eggs,and we were on the road by 8:15am.  Today’s stage was a long trek to the Oregon Coast.  The roads were mostly flat, and Hans’ talk about using tubeless road tires went silent today.  The only mechanical of the trip, 1 flat, was Hans’ tubeless tire, after a wire had punctured his tire and the sealant had dried out.  A new tube and we were on our way.  The last few miles to the coast were extremely windy, but we were treated to an Elk viewing area that gave us a break at the right time.  We arrived in Reedsport and Natasha had already secured another great campsite at Tugman State Park, where we would stay for 2 nights.  After doing laundry in Reedsport, we treated ourselves to a seafood dinner at a local restaurant.  That night around  the campfire the OTB 500 council passed several new doctrines: future trips will require up front deposits to secure transportation, and goofy participants will be deleted from the invite list.

We woke up to light rain from the coast, but we didn’t have to tear down camp. This was our rest & hike day so we slept in until 7am.  Breakfast was Oatmeal and fruit, and we headed up the coast for a short 42 mile ride.  Natasha picked us up and we headed for our best lunch of the trip; fish tacos, clam chowder and shrimp, followed by Huckleberry ice cream.  Huckleberry grows wild all over Oregon. We then drove to Cape Perpetua and hiked along the coastal trails, viewing lighthouses, sea rocks, and tidal pools.  After a great day of sight seeing, we had Veggie Burgers and salad and discussed plans for future OTB 500’s. 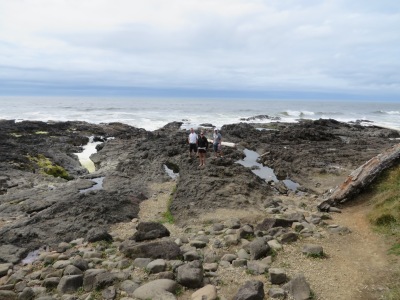 After another drizzly morning, Natasha cooked us Pato Eggs and we broke camp.  We rode through a great section of roadway called the Seven Devils Climbs, along a quiet mountain rode with nice climbs and descents before returning to the 101.  We ended with an amazing view of the ocean and camped at Honey Bear Campground on the beach.  After a chilling dip in the sea, we had spaghetti dinner and stories of our ancestral past.  We learned that Hans is the only Irish descendant that doesn’t drink, and Roobik lived in Canada and New York.  Natasha learned she was going to Hawaii when we return, so everyone was happy.  Then we remembered that our hardest day of climbing was the next day, we called it a night.

We woke up in our secluded campsite and broke down camp for the last time.  Breakfast was pancakes and fruit, and our queen stage began.  We rode along another beautiful, secluded road with good climbing and descents on Highway 33 that paralleled the Rogue River.  Roobik was ready to put the hurt on us for the 5000 foot climb up Bear Creek Mountain, but after 35 miles of riding unbeknownst to us Hans had called out the National Guard to shut down the mountain due to a fire.  They told us we could not proceed, unless we wanted to get shot.

Our only option was to head back to the coast.  We connected with Natasha at Gold Beach and had lunch, secretly cheering inside that we missed a 5000 foot climb.  We then began our journey back home through Redding, CA.  The road closure added 2-3 hours to our drive time back to Redding. We stopped for some pizza in Weaversville and arrived at Mina’s at 9:30pm for a shower and bedtime.

Click here to view more photos of this trip